Not The Baseball Pitcher on William Rotsler's The Far Frontier

Check out this very nice little review of William Rotsler's The Far Frontier ... out now in a brand new edition from Digital Parchment Services/Strange Particle Press:


We’ve all heard that saying “science fiction is nothing but westerns in outer space.” In THE FAR FRONTIER, William Rotsler takes that idea and runs with it.

The planet Zikkala is “way out at the end of the Orion spur of the Perseus arm,” the frontier in other words. Trade ships only stopped several times a year and subjective time being what it was(one year of travel on a starship at light speed was equivalent to twenty-four point eight real time), one never knew what interesting new devices, weapons, products might arrive.

Several trading posts were spotted around in the outer regions away from the few cities, those primitive by standards farther in. Horses were the main transportation, frozen ova and sperm brought with the first ships to arrive and a nursery of sorts was maintained to produce more. Horses were more efficient than machines that might break down and need fuel. By this time, the breeds were all mixed up: Arabian, Clydesdale, quarter horses, others, whatever combination produced the hardiest breed.

The native population, the Kaleen(that’s them on the cover), are the Indians of this west. They like to test their mettle against the humans to prove their “manhood.” The use spears, slings for their rock missiles, and a few captured weapons, sometimes lasers, sometimes needle guns, whatever they took from any kills.

Rader is a trapper, partnered with Korda, a black man, and his woman, Liana, an Oriental. A tougher pair couldn’t be found to partner with. They also took shoka furs for sale. A huge herd beast, the three made a point of only killing the old, ill, or those attacking them. Just enough to make a good living. Rader wears a sidearm in a holster, a laser pistol that fires bolts.

Headed back to town from their cave dwelling, they come upon a cleanboot(a tenderfoot) about to be slaughtered by the Kaleen. Both his horses, the ride and a pack animal are already dead. In rescuing him, they lose a horse and a pack of furs. His name is Wolf Briggs, short for Wolfgang Amadeus Mozart Briggs. And you know the old saying. You save a life, you’re responsible for that life.

In town, Rader visits his favorite pleasure dome run by Alena, a beautiful blond woman. Of course, the locals call it what it is, a whorehouse. Alena tells him she needs a champion. Not just for her pleasure dome, but for the whole planet really.

An outfit called Startraders is buying everything up, putting pressure on those not inclined to sell, some even suffering fatal “accidents.” They want to turn Zikkala into a pleasure world. A nearby planet has been discovered with huge plants that secret a pearl-like ball, from fist sized up to head sized, that is the current “most valuable” item. It takes a lot of men a lot of time to squeeze these gems out of the dangerous plant. They need a place for relaxation and recreation for the men, who otherwise might move on to the next big thing. Zikkala is the closest planet and Alena has learned plans are already being drawn to flood a big valley, the Grand Canyon of Ziggala to form a recreational lake.

Rader is not happy. He's been on twenty-three different worlds in his life and seen this kind of thing before. Whenever the pearls run out, or something more valuable is found, they’ll move on, leaving Zikkala a ruin. Rader likes the life here and joins happily in to save the planet.

He’s outmanned, outgunned, and soon on the wrong side of the law. But when has that ever stopped him.

Look out! Ancient Chicano Sci-Fi Wisdom will be coming at you at the 38th Annual Writers Week at the University of California, Riverside. I'll be teaching a master writing class on Feb. 4. The knowledge I've picked up from decades of writing will be free for taking.

Or, to put it in proper sideshowese:

"Step right up, folks! We've got one of the weirdest mutations to come out of East L.A. here for your examination -- a Chicano with sci-fi growing in his brain! Don't be afraid! Come on, get a good, close look! We're pretty sure his rare condition isn't contagious . . ." 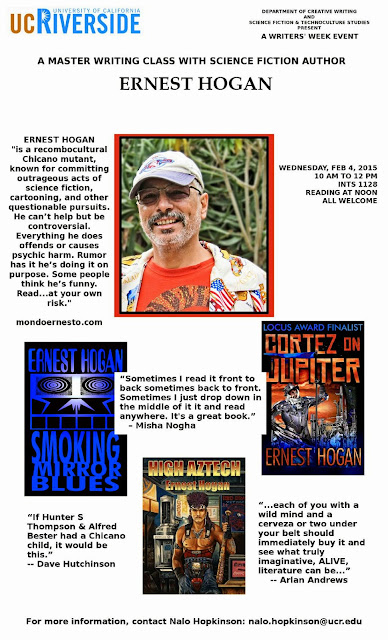 Read Ernest Hogan's Locus Poll Top Ten Novel Cortez On Jupiter - For Only $3.99
at 10:44 AM No comments: Links to this post 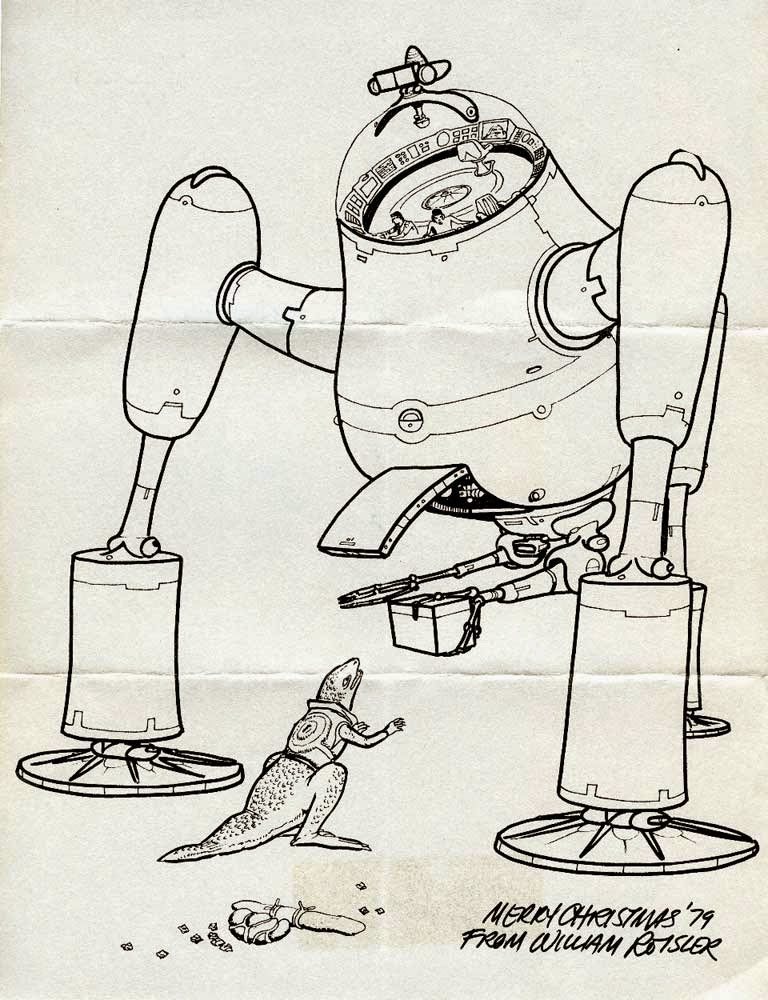