For tickets to these fun nights just click here

Check out this fun video of last Saturday's event!

Charles Lee Jackson has revised and updated his legendary Filmfax profile of the Batman phenomenon.
Now only 99 cents for Kindle at Amazon.com. 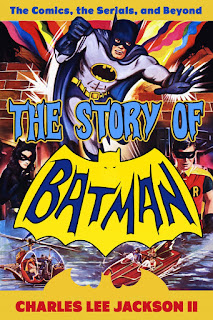 BATMAN FOREVER!
Born in the mind of a young comicbook and movie fan in 1939, the character Batman went on to take the world by storm. Donning a costume in the shape of a bat to terrify criminals when he came swooping in out of the night, Batman had to rely on extreme physical training and a lightning-fast mind in his battles with criminals, supervillains and others. Batman's dark, implacable and human vulnerabilities were to make him DC Comics' most beloved hero.

Soon newspapers and movie serial makers wanted to capitalize on the Dark Knight's (as Batman came to be called) popularity. The result was a legendary newspaper series and one of the most memorable Saturday matinee cliffhangers of all time. So popular was the serial that it resulted in a sequel, "Batman and Robin".

Screen historian Charles Lee Jackson II tells the whole exciting story of Batman, from the beginning through the unforgettable 1960s television series to the award-winning animated show to the Dark Knight's latest screen portrayals and comicbook adventures. This unique ebook edition features drawings, stills and posters from Batman’s many incarnations

Revised, updated edition of an article originally appearing in Filmfax. 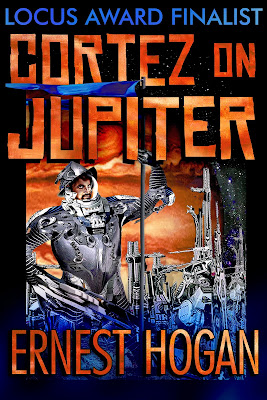 Here's what they had to say:

Hogan's debut, first published in 1990, introduced the subgenre of Chicano SF to a startled, dazzled American audience. Now, 25 years later, the book's Spanglish prose and freeform plot still amuse. All Pablo Cortez cares about is creating art, whether it's humongous graffiti sprayed across Los Angeles or zero-gravity paint slinging in space. Uncool authorities and timid collaborators can't stop him. When he confronts the alien Sirens of Jupiter, who have zapped the minds of earlier explorers, he takes their overwhelming flood of bizarre images as subject matter for new masterpieces. Hogan keeps Pablo's obsessive rants from becoming too intense by working them into a collage of comments from friends and enemies, along with hefty chunks of Aztec mythology, as he builds a jangling, rambunctious picture of artistic genius. This is tons of fun for freethinking readers who appreciate heroes with cojones. (Mar.)


Read Ernest Hogan's Locus Poll Top Ten Novel Cortez On Jupiter - For Only $3.99
at 1:05 PM No comments: Links to this post