Randall Garrett is a true, classic science fiction, master - and after you read Respectfully Mine [Leland Hale, Galactic Conman #2] you'll see why!

Hugo Finalist and Sidewise Award winner faces his most endearing character, future conman Leland Hale with his most daunting challenge. Hale may be the cleverest crook in the galaxy, but can even he crack a closely guarded time capsule? From the creator of Lord Darcy comes another short novel from the glory days of the pulps featuring Randall Garrett's rarest and never-reprinted series character. But beware, Leland Hale will steal your heart - and all your money! Hale thinks the universe owes him a living, and he is collecting on the installment plan. Fraud, larceny and murder are all in the day's work for this master interstellar confidence man. The backwater planet Apfahl doesn't know what is about to descend on them. Mothers lock up your daughters, and fathers lock up your money. Leland Hale is in town. Reprinted from the 1950s pulp, Infinity.

Out Now: Drug On The Market [Leland Hale, Galactic Conman #3] By Randall Garrett

Here is a truly great blast from the past!  Read Drug On The Market [Leland Hale, Galactic Conman #3] by Randall Garrett and you'll see why Garrett is considered to be a true classic science fiction master! 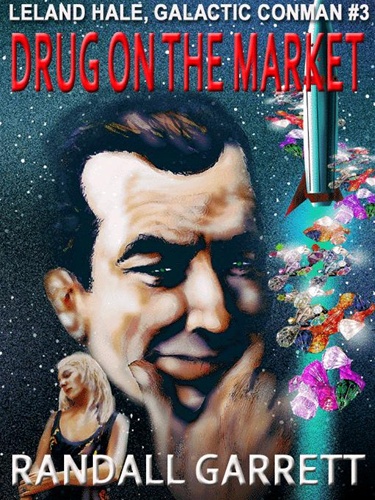 The final adventure of science fiction's most adroit conman! His career cut short by the death of the pulps, interstellar grifter Leland Hale makes his final bow in this brain-puzzling tale of a futuristic cons and their marks. From the text: "The Galaxy is big, and, as far as the Interstellar Police of a century ago were concerned, too damned big. With five billion major wanted criminals moving about the Galaxy at any one time, plus sixty or seventy billion stay-at-homes, finding or tracking one man was not an easy job by a long shot. Even a normally intelligent criminal had a pretty good chance of eluding capture for years, and with a man like Leland Hale, the odds against nabbing him were even higher. They couldn’t possibly keep tabs on every crook in the known Universe, so it should not be considered surprising that The Planetary Police of the world Giffer did not immediately leap from their swivel chairs when, as a matter of routine, they received the passenger list on the luxury liner Bencolin when it docked at the major spaceport of the planet on what was, in that hemisphere, a fine summer day." Reprinted from the Feb. 1960 Fantastic Universe. Cover art: Laura Givens