Did Someone Say ZOMBIES? 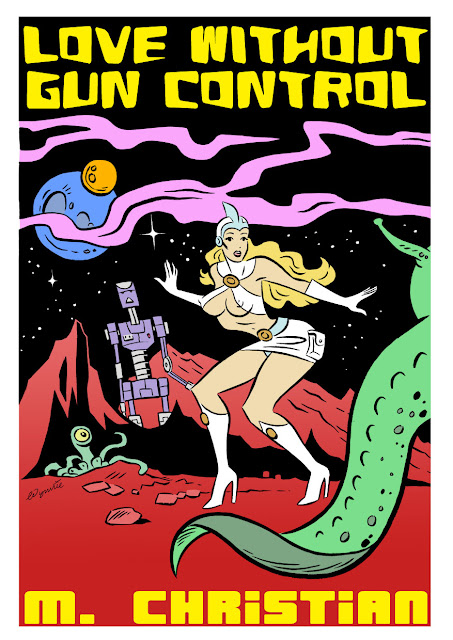 BURIED WITH THE DEAD

All in all, Presidential Aide Lawrence Tucker thought, it had almost been one fucking successful administration. He thought this while pushing the snapping, squirming corpse of the Assistant Secretary of Urban Affairs on a gurney. The gurney had one squeaking, spinning wheel, and it echoed down the flickering fluorescents of Access Tunnel B2, deep inside Cheyenne Mountain.

They’d managed to get Hubbel into the seat with a clear 65%. For the conservative middles they’d used a budget-cutting and job development plank. Rehabilitation and civil liberties had pulled in the sandal-wearers and the granola-eaters. A hands-off business tax approach brought in the big campaign bucks from the old white men. A couple of clean overseas “actions” had cemented Hubbel as a man who took no bull. The loss of Peter, his eldest, in a gangland shooting had gotten him in real firm with the bleeding hearts – that, and his tearful plea to “stop the killing of our children” as he dedicated a big hunk of the domestic budget to education and law enforcement.

At the door of elevator shaft C2, Tucker unholstered the heavy army automatic that Major Clark had given him. Hitting the cycle button, he stepped out of the way of Henry’s clutching hands. The straps were definitely not slipping, but he was being extra careful. He’d had to pump six rounds into Julie, the personal secretary to the Chairman of Foreign Affairs, after she’d slipped free a week or so previous.

Leaning back and lighting a precious Marlboro, he watched the shaft door slowly crack, then ponderously open. Thinking, once again, of Hubbel.

Even the shit that had come up acted as if it had been dreamt up by some divinely inspired spin doctor, Tucker mused. Even that paramilitary wacko had parked a U-Haul packed with fertilizer TNT in front of the White House, Hubbel had insisted on remaining at his desk. “Ain’t going to run from someone who wants ta blow me up with cow shit,” he’d said with his cool smile.

Remembering Julie, Tucker carefully pushed the gurney to the edge of the empty shaft. Popping the safety snaps on the restraining harness; Tucker lifted up his end. Flailing all the way, the corpse slipped off and hit the bottom with a meaty impact. Very meaty: Cheyenne’s basement was a fetid, undulating sea of the dead.

Yeah, it had almost been a great administration, Tucker thought. That is, until the fucking dead rose from their fucking graves. Taking a long drag on his Marlboro, he slammed his palm down on the CLOSE switch.


Tucker had moved up the government ladder during a big “down-sizing” era. He’d honestly expected to find Cheyenne looted and barren. Maybe, if they were lucky, there’d be a thousand cans of military rations and a copy of Life from 1963. Yeah, and a billion cockroaches who would look at them with a “what the fuck are you doing here?” attitude.

Luckily, a couple Chief Executives had managed to squirrel away enough to make the interior of the mountain almost a comfy place. They had cable teevee (but no broadcasts – except for a pathetic Texan who’d played Coal Miner’s Daughter 73 times before the blowing his brains out), purified air, an electronic copy of the Library of Congress, a complete surgery setup, more than enough water, and food for about four months if they starved themselves. The cockroaches hadn’t given them attitude, but they did pretty much have the run of the lowest level storage rooms.

At first they’d been almost jovial. They’d wait out the rising of the dead in air-conditioned and isolated comfort. Eat their canned beef, pork, Spam, beans, and carrots for a few months then crawl out to check out the State of the Union.

Then Lawrence O’Neil (R, VA) suffered a heart attack. They found him the next day, merrily eating Slade Dole (D, OR).

“Learn to fucking adapt,” Tucker said, puffing his Marlboro and clumsily twirling his pistol. Hubbel had used it as a catch-phrase, a way for people to deal with the problems of modern America. Tucker, though, used it as a mantra. He said it over and over again to keep his mind off canned pork, stale Marlboros, weak booze, canned air, intermittent power, the rising of the dead, and imminent starvation.

Tucker jammed the pistol back in its holster. Major Clark would rip him a new asshole if he caught him playing with it.

He was at the intersection of B2 and D2: The fluorescents there were more stable, jury-rigged with loops of rainbow wiring. At first, Clark had almost split a gasket. But after six months in Cheyenne the fire had gone out of the starched Major.

Nothing like “adapting” like fucking mad to make a West Point asshole shut up about “damaging military equipment.” If Moe made the lights work, then they worked. Who cared if he violated the sanctity of Cheyenne’s cold-steel guts to do it?

In addition to the working lights, Moe Travel had re-rigged the air- conditioning ductwork and Cheyenne’s computer system. Now the corridors were draped with cascades of fiber optic cable and great patches of duct tape inches thick.

Moe had been a pleasant surprise, the only one Tucker could remember. Everyone else had panicked, swallowed bullets, cyanide, or simply started crying at unexpected moments. Tucker’s old college buddy, though, had simply dealt with it with by quoting “adapt” right back at them – and went about fixing what was broke.

Magenta 16. The door was painted with a mad collage of splattered paint. The crazy tie-dye had been an impulsive decorating job by a GI to indicate that the room was livable. The same GI had later stepped calmly into shaft C2 to “join his buddies.” His screams as they tore, chewed, and swallowed him alive had lasted for almost twenty minutes – till Clark calmly dropped a grenade down the shaft.

“You decent, Moe?” Tucker said. Taking a final drag, he carefully ground out his cigarette on a bit of unpainted door and stuck it in his pocket.

“Compared to you?” came a squeaky voice through the thick metal, “I’m a saint.”

If the outside was splattered with paint, the interior space was spattered with improvisation. Tucker was again struck dumb at the conglomeration of Moe’s spit and-bailing-wire gizmos that had filled the room. Shaking his head against the riot of hodgepodged gear, he said “Anything?”

Moe’s face, stained a bilious green from a ramshackle computer monitor, looked at him. “You always ask me that.”

“Only ever since you’ve been trying to crack it.”

“Better fucking hope that Clark will develop a personality. Better luck than hacking this motherfucker.”

Tucker made his way through the wheezing, dripping, beeping mass of claptrap machinery. When he was next to Moe he was also a sick green from the monitor’s glow. “Did you try – what did you call it, ‘random number sequences’–?”

“Yes, dear,” Moe said, turning back to his monitor. “Yes, I did. And every other fucking trick I know. Nothing, okay? This fucker uses an eight letter combo – you know how hard that is to crack? With fucking numbers you at least get nine tries per character. But this fucker uses the alphabet so it’s 28.” Moe blinked for a second, disconnecting that part of himself as he remembered... “I thought you were feeding the dead,” he said, looking up at Tucker with pale, but strong, eyes.

“Just dumped Henry down the shaft. No one else bought it during the night.”

“Fucking creepy, man. Can’t see how you can do that shit. Still gotta blow their brains out?”

“Yeah, and I get to think like a fucking dead man.” “Speaking of which, anyone fed the chief exec yet?” “Don’t ask me; I’m just trying to save all our asses.”

The late President of the United States, Commander in Chief of the Armed Forces, etc., etc., Armitage Hubbel, was eating the leg of the Secretary of Agriculture.

“This is a fucking nightmare,” Major Clark said, watching from the other side of a sheet of bullet-proof glass.

“Since when did you wake up?” Tucker said, stepping into the room.

As Hubbel chewed, Tucker noticed for the first time that the skin of one cheek (the right) was starting to sag. It stretched like a blister aching to burst, bulging and pulsing with the action.

“See that it doesn’t. What does Einstein say?”

Human blood and flecks of skin and tissue covered the front of Hubbel’s suit. Tucker absently noted that Hubbel’s crotch was one huge stain of blood and bile. The President tore into the leg, stuffing the human flesh into his mechanically chewing mouth. His hands punctured and tore loose stringy ribbons of flesh.

“The same: we’re fucked. We’ll be dead of starvation or dehydration long before he can crack the thing.”

With a few jaw-stretching bites into the fat calf, Hubbel ripped the last few strips of flesh off the bone. Working crackling tendons and gristle like bubble gum, his feral eyes whipped around the storage locker. The prez was searching for something else to eat, to fill his rotting gut.

“And to think I actually voted for the fucker,” Tucker said.