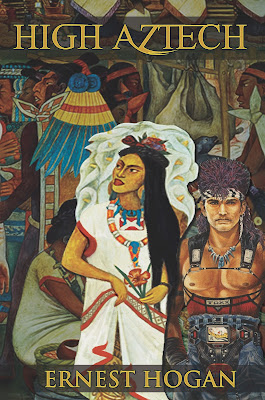 The enhanced ebook version of High Aztech, which contains a new introduction about the writing of this highly controversial novel which introduced Chicano tropes to science fiction, is available now – and a premier trade paperback edition will be coming out in April, 2016.

Hogan, who describes himself as "–a recombocultural Chicano mutant, known for committing outrageous acts of science fiction and other questionable pursuits" has had stories published with great acclaim in publications such as Amazing Stories, Analog, Science Fiction Age, Semiotext(e)SF, and many others.

This re-release of High Aztech by Digital Parchment Services was preceded by Cortez On Jupiter last year – will be followed by Ernest Hogan's Tezcatlipoca Blues, and a collection of Ernest Hogan's short stories: Pancho Villa's Flying Circus.

High Aztech takes place in 21st century Mexico, Tenochtitlán, the metropolis formerly known as Mexico City, is the most exciting place on Earth. Stainless steel pyramids pierce the smoggy sky. Human sacrifice is coming back into fashion, especially on the new Aztechan TV channels, and everyone wants an artificial heart. Xolotl Zapata, celebrated poet, skeptic and journalist, starts receiving death threats from a cult he's lampooned in a comic book. But soon he will have much worse problems and be running for his life. The government, the Mafia, street gangs, cults, terrorists, even garbage collectors will be after him. Why? He has been infected with a technological development that will changing human life as we know it Zapata is carrying a virus that can download religious beliefs into the human brain - a highly contagious virus that is converting everyone he meets, and everyone they meet, to the Aztec religion. This is Witnessing with a PUNCH! Since he's a virulent carrier he infects a large part of the city all by himself, and the masses, filled with visions and portents, await the End of the World.

"The plot twists and turns, bouncing between the horrors of a police state with high-tech weaponry and eavesdropping equipment and the feverish hallucinations that the protagonist endures as he is captured first by one enemy then another. Those who enjoy science fiction will probably find pleasure in this book. I found the book entertaining and clever in the complexities of its plot ... an example of what might be called Latin American sci-fi magico-realism." – Nahua Newsletter

"Cyberpunk is the combining of science fiction and technology with a future society on the brink of self-destruction. Ernest Hogan takes the concept a step further, blending in his love of the Aztec’s ancient beliefs and civilization to produce very unique and gripping stories. When it comes to science fiction of a different breed, Hogan is definitely sitting in the front row. One reviewer aptly referred to Hogan as a 'mad Mexican Hunter S. Thompson.'" – Wicked local.com