READ THE ENTIRE STORY IN THE BEST OF AMAZING STORIES: THE 1940 ANTHOLOGY 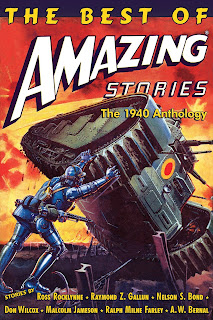 THE VOYAGE THAT LASTED 600 YEARS
Don Wilcox
Thirty generations would live and die before the Flashaway reached its destination. Could the one man who was to live on keep them to their purpose?

THEY gave us a gala send-off, the kind that keeps your heart bobbing up at your tonsils. “It’s a long, long way to the Milky Way!” the voices sang out. The band thundered the chorus over and over. The golden trumpaphones blasted our eardrums wide open. Thousands of people clapped their hands in time.
There were thirty-three of us—that is, there was supposed to be. As it turned out, there were thirty-five.
We were a dazzling parade of red, white and blue uniforms. We marched up the gangplank by couples, every couple a man and wife, every couple young and strong, for the selection had been rigid.
Captain Sperry and his wife and I—I being the odd man—brought up the rear. Reporters and cameramen swarmed at our heels. The microphones stopped us. The band and the crowd hushed.
“This is Captain Sperry telling you good-by,” the amplified voice boomed. “In behalf of the thirty-three, I thank you for your grand farewell. We’ll remember this hour as our last contact with our beloved Earth.”
The crowd held its breath. The mighty import of our mission struck through every heart.
“We go forth into space to live—and to die,” the captain said gravely. “But our children’s children, born in space and reared in the light of our vision, will carry on our great purpose. And in centuries to come, your children’s children may set forth for the Robinello planets, knowing that you will find an American colony already planted there.”
The captain gestured goodbye and the multitude responded with a thunderous cheer. Nothing so daring as a six-century nonstop flight had ever been undertaken before.
An announcer nabbed me by the sleeve and barked into the microphone, “And now one final word from Professor Gregory Grimstone, the one man who is supposed to live down through the six centuries of this historic flight and see the journey through to the end.”
“Ladies and gentlemen,” I choked, and the echo of my swallow blobbed back at me from distant walls, “as Keeper of the Traditions, I give you my word that the S. S. Flashaway shall carry your civilization through to the end, unsoiled and unblemished!”
A cheer stimulated me and I drew a deep breath for a burst of oratory. But Captain Sperry pulled at my other sleeve.
“That’s all. We’re set to slide out in two minutes.”
The reporters scurried down the gangplank and made a center rush through the crowd. The band struck up. Motors roared sullenly.
One lone reporter who had missed out on the interviews blitzkrieged up and caught me by the coattail.
“Hold it, Butch. Just a coupla words so I can whip up a column of froth for the Star— Well, I’ll be damned! If it ain’t ‘Crackdown’ Grimstone! “
I scowled. The reporter before me was none other than Bill Broscoe, one of my former pupils at college and a star athlete. At heart I knew that Bill was a right guy, but I’d be the last to tell him so.
“Broscoe!” I snarled. “Tardy as usual. You finally flunked my history course, didn’t you?”
“Now, Crackdown,” he whined, “don’t go hopping on me. I won that Thanksgiving game for you, remember?”


HE gazed at my red, white and blue uniform.
“So you’re off for Robinello,” he grinned.
“Son, this is my last minute on Earth, and you have to haunt me, of all people—”
“So you’re the one that’s taking the refrigerated sleeper, to wake up every hundred years—”
“And stir the fires of civilization among the crew—yes. Six hundred years from now when your bones have rotted, I’ll still be carrying on.”
“Still teaching ‘em history? God forbid!” Broscoe grinned.
“I hope I have better luck than I did with you.”
“Let ‘em off easy on dates, Crackdown. Give them 1066 for William the Conqueror and 2066 for the Flashaway take-off. That’s enough. Taking your wife, I suppose?”
At this impertinent question I gave Broscoe the cold eye.
“Pardon me,” he said, suppressing a sly grin—proof enough that he had heard the devastating story about how I missed my wedding and got the air. “Faulty alarm clock, wasn’t it? Too bad. Crackdown. And you always ragged me about being tardy!”
With this jibe Broscoe exploded into laughter. Some people have the damnedest notions about what constitutes humor. I backed into the entrance of the space ship uncomfortably. Broscoe followed.
Zzzzipp!
The automatic door cut past me. I jerked Broscoe through barely in time to keep him from being bisected.
“Tardy as usual, my friend,” I hooted. “You’ve missed your gangplank! That makes you the first castaway in space.”
We took off like a shooting star, and the last I saw of Bill Broscoe, he stood at a rear window cursing as he watched the earth and the moon fall away into the velvety black heavens. And the more I laughed at him, the madder he got. No sense of humor.
Was that the last time I ever saw him? Well, no, to be strictly honest I had one more unhappy glimpse of him. It happened just before I packed myself away for my first one hundred years’ sleep.
I had checked over the “Who’s Who Aboard the Flashaway”—the official register—to make sure that I was thoroughly acquainted with everyone on board; for these sixteen couples were to be the great-grandparents of the next generation I would meet. Then I had promptly taken my leave of Captain Sperry and his wife, and gone directly to my refrigeration plant, where I was to suspend my life by instantaneous freezing.
I clicked the switches, and one of the two huge horizontal wheels—one in reserve, in the event of a breakdown—opened up for me like a door opening in the side of a gigantic doughnut, or better, a tubular merry go round. There was my nook waiting for me to crawl in.
Before I did so I took a backward glance toward the ballroom. The one-way glass partition, through which I could see but not be seen, gave me a clear view of the scene of merriment. The couples were dancing. The journey was off to a good start.
“A grand gang,” I said to myself. No one doubted that the ship was equal to the six-hundred-year journey. The success would depend upon the people. Living and dying in this closely circumscribed world would put them to a severe test. All credit, I reflected, was due the planning committee for choosing such a congenial group.
“They’re equal to it,” I said optimistically. If their children would only prove as sturdy and adaptable as their parents, my job as Keeper of the Traditions would be simple.
BUT how, I asked myself, as I stepped into my life-suspension merry-go-round, would Bill Broscoe fit into this picture? Not a half bad guy. Still—
My final glance through the one-way glass partition slew me. Out of the throng I saw Bill Broscoe dancing past with a beautiful girl in his arms. The girl was Louise—my Louise—the girl I had been engaged to marry!
In a flash it came to me—but not about Bill. I forgot him on the spot. About Louise.
Bless her heart, she’d come to find me. She must have heard that I had signed up for the Flashaway, and she bad come aboard, a stowaway, to forgive me for missing the wedding—to marry me! Now—
A warning click sounded, a lid closed over me, my refrigerator—merry go round whirled— Blackness!

Passing For Human is "One Of The 10 Weirdest Science Fiction Novels That You've Never Read." -iO9 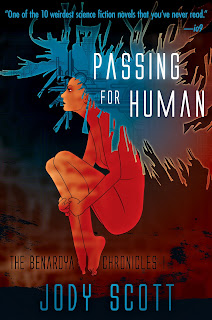 Publisher's Weekly wrote:
"This satire was first published in 1977, but its biting commentary still registers strongly today. Aliens trained in Western pop culture disguise themselves as well-known figures and embark on two intersecting tasks: judging humankind’s readiness to join the interstellar community, and searching for a ruthless criminal. Scott carries on the tradition of Mark Twain, using outside observers to remark on society. While the treatment of women is the primary focus, other targets include consumer culture and the general human willingness to be led by the nose by a charismatic figure. The narrative drags at times, but the speculative elements are well written and give a good sense of physical and cultural differences. A light touch keeps the moralizing from getting too ham-fisted, and this cautionary tale calling for a better world is a message needed now more than ever."
"A riproaringly magnificent time. Passing For Human is quite unlike anything anyone else has ever done." –Neil Gaiman

Starring:
Benaroya
A 36-foot
Extraterrestrial "dolphin"
In the role of:
"Brenda Starr"
"Emma Peel"
Mary Worth
And a happy New Guinea hoptoad

With an all-star cast including
Abraham Lincoln
Jennison, the Kansas Jayhawker
Heidi's Grandfather
General George S. Patton
The Los Angeles Police Department
The Prince Of Darkness
The Royal Canadian Mounted Police
Ancient Egypt
The Isle of Capri
Interstellar Station 8
Four billion newly created people
And several hundred Richard Nixons
When a dolphin-like alien comes to Earth disguised in a female human body, it sets the stage for a wild feminist romp that out stranges Stranger in a Strange Land.
On sale now for Kindle - Only $2.99