Out Now: World Beyond Pluto [The Adventures of Johnny Mayhem #4] by C. H. Thames

From the pages of the best of the pulps comes another tale in the Johnny Mayhem saga by C. H. Thames: World Beyond Pluto [The Adventures of Johnny Mayhem #4]!  If you've enjoyed Johnny's previous adventures then this is a must-have book! 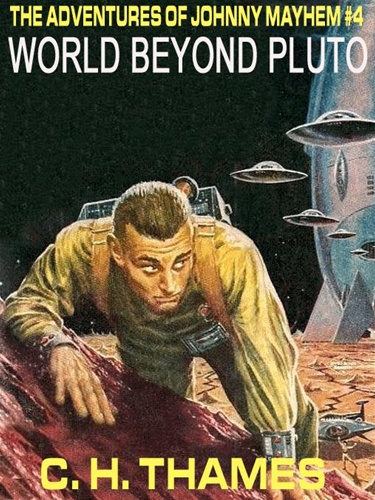 This ebook contains the final three suspense-filled adventures in the "lives" of Johnny Mayhem, the fabulous cosmic trouble-shooter. Mayhem was the most popular character appearing in the American science fiction magazines of the mid- to late-1950s. His body reconstructed by aliens after a crash landing, Mayhem is literally "the man who saved the universe" – and the price he pays for it is a terrible one, for Mayhem's consciousness can move from body to body, but he can inhabit each body only for 30 days, or he and it will die. So Johnny becomes a galactic trouble-shooter who must face the greatest dangers that threaten humanity and triumph over them – or perish.  The first story, "A Coward Named Mayhem," sends him into space on a brave man's mission. But how can he succeed—trapped as he is in the body of a man with a coward's reactions? The second, "Think Yourself to Death," involves Mayhem in a gender-change, transplanted tin a female body, and adventure on a planet of Ophiuchus. In Johnny's final adventure ever, "World Beyond Pluto," Johnny is off to Partap's Planet, whose stubborn residents resist evacuation when their sun is about to go nova.