(This never-before reprinted conversation was originally published in an issue of the L. A. Reader in mid-1984 (at the time of the movie release). During our post-interview conversation Frank, who was on his way to climb the Himalayas with Sherpa guides, mentioned that he had just written the outline for what would be the final Dune book and he and an attorney had put a copy in a safe deposit box until he returned just in case anything happened to him. On his way to the Himalayas, Frank was diagnosed with a fast moving cancer, and passed away a few months later. Twenty years on, I discovered that no one in the Herbert family had known of the outline, and that its existence had only recently been discovered.)
“A beginning is the time for taking the most delicate care that the balances are correct. This every sister of the Bene Gesserit knows, To begin your study of the life of Muad’Dib, then take care that you first place him in his time: born in the 57th year of the Padishah Emperor, Shaddam IV.  And take the most special care that you locate Muad'Dib in his place: the planet Arrakis . . . Arrakis, the Planet known as Dune, is forever his place.” 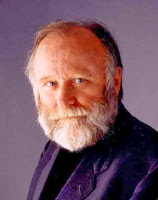 In 1965, after being turned down by 22 different publishers despite its enthusiastically received serialization in Analog, Frank Herbert's Dune was published in a tiny edition, of 2, 000 copies by a small house known principally for auto-repair manuals.  Later that year, the paperback rights were picked by a publisher of genre fiction, notorious for never paying royalties. Herbert's earnings from both editions of his monumental vision (700-plus pages) totaled a modest $2,500.

Nearly 20 years later, Dune and its successors have become massive-selling cult classics, their success aided by a terrific series of plugs in the Whole Earth Catalog and avid proselytizing by hardcore fans.  The fourth book, bearing the unlikely title God Emperor of Dune, seemed to be permanently ensconced on the New York Times bestseller list, and the Fifth, Heritage of Dune, has also made the list.  And David Lynch's filmed version of Dune was reportedly one of the most expensive movies ever made (for its era).

The Dune cycle blends traditional science-fiction elements - supermen, galactic intrigue, alien ecology, panoramic battles between good and evil, etcetera] - with what the Science Fiction Encyclopedia terms "complex intellectual discourse and genuinely developed concepts." A common theme in his work is an extrapolation of evolution, and how natural selection creates humanoids able to thrive in the most extreme environments.
Herbert grew up and was educated in Washington state and spent two decades as a reporter and photographer for newspapers in the Northwest before becoming a full-time novelist. (He was one of the first photojournalists to use a 35mm camera.) Since then, he has been peripatetic to an extreme, living on and traveling to countless islands and at least five continents.  He next plans to explore the terrain surrounding Mt. Everest, with several Sherpa pals, and to document the East/West culture clash in that altitudinous zone.
But when this interview was conducted, he was comfortably settled in an airy condo on Manhattan Beach's boardwalk.  State-of-the-art stereo equipment dominated the absolutely uncluttered living room.  There are no books in sight.  Herbert, clean-shaven, looked like a handsomer Jack Albertson, and was much thinner than the dust-jacket portrait would lead you to believe.  Before and after the interview, he chatted fluently on subjects ranging from the latest camera gear to the intricacies of piloting small aircraft, and seemed genuinely pleased to be interviewed.

JMS: Dune is your most celebrated, successful and in many ways most personal book.  Certainly you must have approached the movie version with a very critical eye.  What did you think of it? 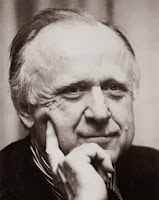 HERBERT:  Some people who haven't read the book are a bit confused.  About 20 percent of these are put off. The others are saying, "I missed something.  I'm going to go back and see it again or read the book." But I don't want to be in a position of just flogging the book.  It's a great movie.  Really, David has done a damned fine job.  Pictorially and texturally it's beautiful.  I kept wanting to freeze frame shots and say, "I want that one on my wall, and that one, and that one." David's a painter; he had Tony Masters there as production designer, for God's sake.  And his choice of visual metaphors is really superb.  The idea of rococo Renaissance background art ... well, I recreated a medieval feudal society.  So what does Renaissance art say to Western viewers?  It says feudatory, right?  You don't even need to mention it.  It took me many pages to create the effect on paper he creates in two seconds with a shot.
The only way this movie could have been made was if they spent megabucks on it.  And to be pragmatic about it, that meant they had to do a production they could show in theaters everywhere, and that meant that they had to cut it.  Luckily, we have about five hours of film.  In fact, we have as much film on the cutting room floor as we have on the screen.  All the scenes that everybody misses from the book are all there.  So we are now discussing doing a special mini-series for T.V. about three or four years down the pike essentially the uncut version of the film.

(Part II of this interview will appear soon.)

FOR HALLOWEEN FREE HOW TO BONK A ZOMBIE!

J. D. Crayne's Horrifying, Hilarious HOW TO BONK A ZOMBIE

It's FREE for Halloween! What are you waiting for? 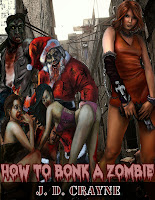 [And while you are reading it, listen to the lyrics that start off each chapterfrom Bill Mills' "I'll Eat Your Brain".]
http://thevoicesoffandom.com/mp3/eat_yer_brain_by_bill_mills_extended.mp3
at 1:38 PM No comments:

It's the question on everyone's lips. Or at least the evil masterminds of crime known as Continent-Eight.

The Emperor is the central figure in a series of underground pulp magazine novels our sister imprint Deerstalker Editions is reprinting written by Charles Lee Jackson II and featuring the exploits of The Emperor, a debonair 1960s adventurer with a team of agents who help him out on his case.

A bit of Doc Savage, a bit of James Bond and a dash of The Saint,  The Emperor will face many perils and the world's deadliest villains during his career, but none as dangerous as those of Continent-Eight, the dread Executive of Crime.

Who is Continent-Eight? Next you will be asking, Who is Varan Haruchi, or the Gila,  or Victoria Poten, or Warhead, or Madame von Teufel.

Maybe you should read what follows. The first draft of our Pocket Guide to Charles Lee Jackson's II's Emerorverse - and then read for yourself the underground pulp action sensation – first time ever in book form!


Are you a fan of Jason Bourne and Cotton Malone? Of “Maverick” and “The Man from U.N.C.L.E.”? Of Modesty Blaise and Catwoman? Of Spiderman and Green Lantern? Of Doc Savage or the Spider?

Then prepare to enter a world of adventure and danger, of a hero unequaled since the days of the movie serial, of the comic book, and of the pulp magazine - a world of memorable characters, good and evil. Welcome to the Emperorverse!

For over four decades, in dozens of privately published comic books and pulp magazines, Charles Lee Jackson II has produced a unique body of work set in what his fans hail as the "Emperorverse". Its central figure is The Emperor, a 1960s adventurer and crusader for good whose secret identity is the harassed head of a minor Hollywood movie studio. The Emperor is smart, swift, capable of amazing feats, all but indestructible, well-dressed, able to charm beautiful women with a single smile. He leads the fight for law and justice against all odds.

In his war against evil, The Emperor is aided by as memorable a group of allies in crime-busting as Doc Savage's fabled companions. His supporting cast includes Bill Mills, musician, stuntman, and adventurer who joined The Emperor to make motion pictures and stayed to fight crime; Max Decker, Federal Intelligence agent who met The Emperor in the field and worked for many years as a crime-fighter while masquerading as a criminal gang-leader, the Gila; the amazing Shanghai Lil, red-headed woman as skilled with a blade as her wits. Plus a host of costumed heroines and heroes, super and otherwise, among them Shooting Star, Solara, Nemesis, Cat's-Eye, Fireball, and the robot Titan.

Opposing him is Continent-Eight, the international Executive of Crime and its creator, Varan Haruchi, AKA The Black Dragon, whose exposure to arcane experimental chemicals has resulted in his long-lived youthful appearance. The Emperor also encounters a host of other evil-doers in his war against crime and destruction: Dr. Yalta, doctor and dentist once recruited by US intelligence for his resemblance to warlord Adolf Hitler, kept young by the same accident, who now supervises medical and scientific crimes for Continent-Eight. Maskman, a mysterious helmeted figure, whose true identity is unknown even to his partners in crime. Victoria Poten, The Jade Dragon, third generation Eurasian crime boss whose personal goals of crime often place her at odds with her partners. Horst Sterling Rosefeld, the mysterious and powerful leader of the Church of Nihilism, dedicated to the destruction of the human race, and ruthless enough to accomplish it. And a rogue's gallery of sinister figures, notable among them Johnny Rainbow, the Steel Skull, Xavier Xavier AKA Dr. Double X, the Eye, Alain Sarnov, the Dragon, Warhead, and Madame von Teufel.

They are all part of the Emperorverse, an incredible assembly of international spies, space aliens, mad scientists, colorful villains, costumed heroes, secret agents, spacemen, and even the cowboys of yesteryear, all engaged in the wildest and wooliest adventures you’ve ever read.

It's an amazing and unequaled creative tapestry, woven into a complex, interrelated web that snares the imagination. Brought to you by its creator, Charles Lee Jackson II, and Deerstalker Editions.

If you are a fan of David Leadbetter, James Rollins, Lester Dent, Leslie Charteris and/or Maxwell Grant, you won't want to miss The Emperor books.
Click HERE to Buy book one, The Emperor's Gambit, on Kindle at Amazon, and begin the adventure now!

Books set in the Emperorverse are available at