Now FuturesPast Editions, the pioneer publisher reprinting pulp fiction on the web, is bringing all four classic "Agent of T.E.R.R.A." books back in print for the first time in 50 years!

In each book, Hannibal is aided by his sneering, superior, shape-changing, 15-pound fellow agent, Webley (an irascible alien whose comments on Earth people's practices and customs are incendiary). Together Hannibal Fortune and Webley must foil the plots of Gregor Malik's EMPIRE, who seek to control the future by changing the past.

Larry Maddock's Agent of T.E.R.R.A. series will be published in trade paperback and as ebooks. The first three are available now as ebooks.

Only $2.99 at Amazon, B&N, and iTunes.
#1. The Flying Saucer Gambit
#2. The Golden Goddess Gambit
#3. The Emerald Elephant Gambit
#4. The Time Trap Gambit (in preparation) 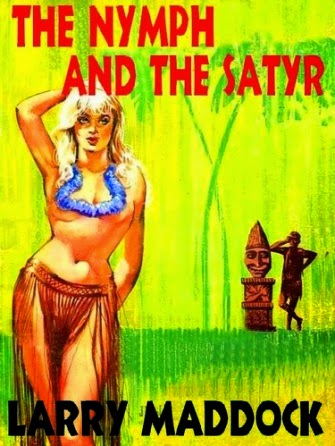 (Larry Maddock is the pen name under which sexologist and satirist Jack Owen Jardine wrote the majority of his science fiction, including stories for Imaginative Tales, New Worlds, and the Agent of TERRA series.)


The Nymph and the Satyr: A Comedy of Uncontrolled Gender Changing
The Mind Monsters: A Hilarious SF Romp


And coming soon, his never reprinted Sword of Lankor.