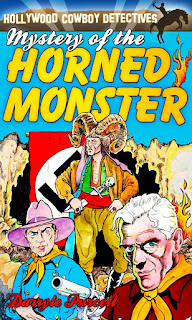 It’s 1939 and someone seems to be trying to kill famous monster stars Boris Karloff and Bela Lugosi, shooting a horror film at Monogram Studios. Sets are being burned down and the Hollywood Cowboy Detectives – PR flack Curly Woods, studio chauffeur Nick Danby and cowboy star Hoot Gibson – are asked to find out who is behind the arson and why.

With the help of Karloff and Lugosi, longstanding rivals (who find it difficult to bury the hatchet and work together even when their lives are in danger), the Hollywood Cowboy Detectives pursue the trail of a monstrous honed figure whose goal may be to destroy Los Angeles itself. Fighting their way through flying torpedoes, suicide bombers, brown-suited thugs, and weapons that fire liquid electricity, the HCD’s and their actor allies finally find themselves trapped and outnumbered in the underground lair of a real-life monster that makes Universal Studios’ horrors pale in comparison.

In this cliffhanger, pulp-style adventure, author Darryle Purcell’s Hollywood Cowboy Detectives find themselves up against their most dangerous nemesis yet.