[This never-before reprinted conversation was originally published in an issue of the Los Angeles Reader in mid-1984 (at the time of the Dune movie's release).]

JMS: In Dune, written in the early '60s, you were one of the first to question the danger of modifying the ecology of a particular environment to try to "improve" human conditions. 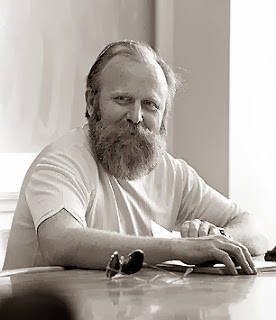 HERBERT:  Let me give you a little example on that one.  About 20 years ago the U.S. and West Germany pooled their resources -- well, we put in most of the bucks and the people - and went into North Africa, and all across most of the southern veldt of the Sahara.  We dug a lot of tube wells - we drilled them, put pumps on them and brought water up.  We did a good thing and then we walked away from it, more or less.  Technologically we sure as hell walked away from it.

What happened was that they had more water and more grazing areas.  More arable land was opened up, more cattle were put on the land, and the population grew to equal the new food supply.  Then about five years ago, the rainfall, cyclic rainfall, decidedly decreased.  Three years ago it went, practically dry.  Of course the water table went down much faster because they were pumping.  Right now as we sit here talking, 2,000 people a day are dying in that area.  You can't go in and fix one thing to make everything all right in a complex situation. It's like an internal combustion engine.  If there is only one thing wrong you may happen on the one thing that fixes it.  But chances are much larger that by just doing one thing you create other problems you're going to have to adjust.  And you have to keep adjusting until you create a balance.
For instance, one of the side effects of what we did in some of those North African villages was that we broke down the social system.  Women previously went to the well for water, which they carried back on their heads, and the well was where they solved all their community problems.  By piping water into the houses we cut off that link in their society and all hell broke loose.  There were family feuds, murders, all kinds of things that had never occurred in these places, in that particular way, ever before.  The Green Revolution was another, similar con game.  We went in with a technologically based system into primitive countries, and where before they had depended on manure and animals to pull their plows and that sort of thing, we made them dependent on special soil additives and special seed stock which was, by the way, very vulnerable to disease.
JMS: In Dune one of the groups is trying, through genetic manipulation and selective breeding, to produce a mental superman, a Kwisatz Haderach, who can see and predict the course of future history, guiding humanity along the best path for its development.  But in Children of Dune, the hero's son, after achieving a state of radically expanded consciousness, says, "There.is no Kwisatz Haderach." 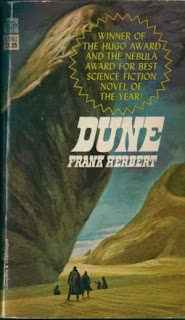 HERBERT:  You know what we're discussing, don't you?  We're discussing prescience, prediction, and free will.  Very old ideas.  I started analyzing what people really mean when they use these words.  In the first place, and I've said this time and again, if I were to hand you right now an exact and unswervable heartbeat-by-heartbeat prediction that nothing could change your future or what's going to happen to you from now to the moment of your death, your life would be instant replay, an absolute and utter bore.  You'd be sitting there at this instant saying: "Well, next he's going to say..." You'd know it all.  Eighty tedious years if you're unlucky.  Ten if you're lucky.  That's why I blinded the hero in the second book.  He doesn't need his eyes.  He knows everything that is going to happen.  He chose to put himself on that monorail.
What most people want when they talk about futurism -- all the companies that hire me to play futurist for them -- they don't want the future, they want now locked in.  FDR, he did it.  In 1933 he appointed a committee called the Brain Trust.  They were given the primary job of "determining" what the course of technological development and innovation would be for the next 25 years and what influence this would have on our lives.  What had they not come up with?  That's the fascinating thing.  Faster-than-sound travel, transistors, antibiotics, atomic power, World War II, are just a few small items that these Brain Trusters missed.  What does this say to us?  It says that if you look at history carefully the surprises are the things that turn us upside down as a society.  Asimov in his Foundation Trilogy has the Second Foundation, which can predict the course of the future, and he has his character the Mule in there, his wild card, but again totally within scientifically predictable norms.  Horseshit!
What technology does to us is distribute the wild cards farther and farther afield.  Because really what's going on is that the amount of energy that can be aimed and released is getting greater and greater and falling into the hands of smaller and smaller groups.  The availability of this energy is also being disseminated all through this society.  Something I proved conclusively in my research for White Plague.  I got on the horn and I started calling suppliers of equipment I would need to engage in recombinant DNA research myself in my basement.  I introduced myself only as Dr. Herbert.  I didn't elaborate.  You know, what's the difference between a Doctor of Letters and a Doctor of Medicine?  Anyway, I asked, "How, does my purchasing department get your XR 21?"  Their reply was, "When your check has cleared, we will ship."  Anything I wanted.
Now does that mean I want to clamp a lid on it?  No way!  That would only drive it underground and make a black market, which is what we do with hard drugs.  We create a black market.  A very profitable black market by the way, which can buy the inviolate Briefcases of diplomats, buy the police force of an entire major city or enough of it that it makes no never mind.  You know what happened to the heroin the cops seized in The French Connection?  It vanished from the police property room in New York City.  You can't control these things with a lid.  In fact if you try, like a pressure cooker, you only create dangerous, explosive pressure.
Survival of the species depends on adaptability, and that depends on variability, variation.  I think that big government is one of the major dangers in our world.  It tends to homogenize a society, and our strength is in our variations.  The bigger it is, the worse it is.  Small governments, small societies -- developing their own mores, their own social systems, their own people, going their own ways to a limit -- do not endanger their neighbors.  I hope to God we get off the planet soon, because that's what will happen in space.  The difficulty of communication across space at our present level of technology dictates that if we get off this planet with a viable breeding population of humans, and if they scatter into different directions, each group is going to develop in its own way.  Variation means the species will survive.  And that's what I'm addressing in the Dune books. 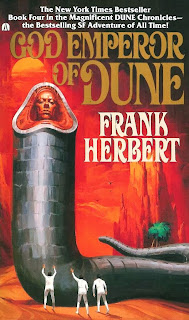 JMS:  You said earlier that your original vision of the Dune saga encompassed only the material in three volumes culminating with Children of Dune. Why did you write more?
HERBERT:  I had a character who wouldn't get out of my head. it fascinated me to think of what kind of a society would develop if it was under the thumb of one individual for 3,500 years.  You know, it's kind of like an amplification of the Pharaonic dynasties but all in one dynasty.  So I had that character firmly in mind.  It wouldn't get out.  So I said, "Okay, here's your society after 3,500 years.  What happens?  What has happened?  What do we become?"  I was also questioning another major premise: that we know what peace is.  And yet for that to be true, every person would have to know themselves in the classical sense.  Every Person would, have to know: "Why am I doing this?  What are my motives?  What is my unconscious direction?"  Well, that is a big issue, you know.  A much bigger issue than people generally realize.  So I'm saying, "All right, you think you know peace and what it would mean and you think you know what the future can bring.  Here's a guy that's going to give it to you for 3,500 years and enforce it.  The only violence is his.  Experience it for the term of the book, and see how you like it."  It's a little demonstration project like 1984.
And all of these premises are the same premise when you come right back to it.  That evolution cuts off right here.  And this is the destiny of humankind, not a death wish, in my books.  That's what I'm playing with in the seventh book, moving toward showing the kind of government that finally evolves out of the situation I've been creating.
I've been playing these games all along.  Not popular games.  But obviously there are 15 million people worldwide who have said, "Hey, this is interesting."  So I have an audience out there.  And I'm talking to them, saying, "Take another look at a these precious premises upon which we have based our governments and our ideas of leadership.  Let's take a good, long, hard look at things.  Do they really work or do we continue to make mistakes - the same mistakes over and over and over?