Long before he penned television and movie classics like Fantastic Voyage, "Mirror, Mirror" "Day of the Dove", "Requiem for Methuselah", and "By Any Other Name", Jerome Bixby was a young short story writer trying to make a living selling yarns to any publication that appeared likely. His sly comedy, "The Battle of the Bells" appeared in the September 1954 issue of Imagination (the illustration for the story is reproduced below). Along with the story the editors requested a 500 word bio, and Bixby supplied one. This "About the Author" contains some illumination stories for fans of Fantastic Voyage,  Star Trek, and his other work for the screen and tv. Bixby wrote:


"Was born in Hollywood, January 11, 1923, at 3:48 A. M., began rolling slowly eastward, and fourteen years later found myself in New York City.
"In the interim I'd had measles, whooping cough and mumps all at the same time; bit a dog and a 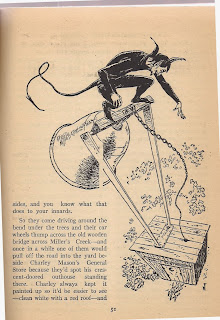 policeman; outrun a tornado; flown a kite bearing a message to an angel (Lon Chaney's—and it came down without the message), and read a pulp magazine.
"The magazine was Street & Smith's old Wild West Weekly, one half of whose total wordage every issue consisted of gunshots written out as "Crang-g-g-g!" Soon I graduated to Doc Savage, Bill Barnes, Operator #5, G-8, The Spider, ad nostalgium (collected, swapped, ran a store for the neighborhood kids in my garage) . . . and at last to Astounding, because I wondered how the rocketships on the cover flew without wings. I immediately grew antennae, and haven't stopped reading science fiction since . . . and a year afterward, at thirteen, I sold my first story I ever wrote. To Astounding, you ask? Nope—to Wild West Weekly. Crang-g-g-g!
"My first ironclad ambition was to be a concert pianist; was just beginning to shape up when somebody broke my fist with his jaw . . . that ended that. Turned to composition; was an early member of The New Chamber Music Society, and had some radio and recital performances of piano works. Dropped music for ten years then (had a stomach to support)—but now the bug is starting to bite again: am sketching an orchestral work. 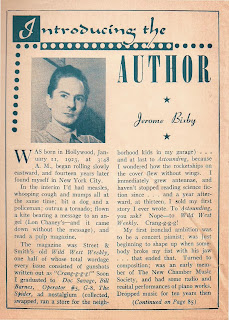 "Have worked as: soda jerk, office boy, lathe hand—(break here for military service: Air Corps, last war) —record salesman, insurance investigator, pianist in a dance band, portrait sculptor, freelance cartoonist, and recently (since '49) as a stf editor on and off. The ons have included Planet, TWS, Startling, Galaxy and Beyond; during the offs I've free-lanced. Five wonderful years . . . I only hope the next five are half as much fun.
"Likes: cats (her name is En-gram), Beethoven, bittersweet chocolate, Prokofieff, Adlai Stevenson, summer, and disputatious sophistry.
"Dislikes: overexuberant dogs, liver, 99% of all popular music, the advertising racket, mobiles, coffee that isn't quite sweet enough, and big fat cars with chromium smiles.
"Am 5'10", weigh about 135, and have muscles only in my fingers. I am content as I review the list to those who like and dislike me. I write my stories in a 4' by 4' closet, because I grind my Royal at night and sleep days when I hit a writing streak, and people who aren't crazy like to sleep at night . . . a man banged on the door and told me so.
"I'm glad to be alive, and in this country. I would, however, happily employ time-travel, catalepsy, deep freeze, transposition of souls or any other workable device in order to escape the childswarm of not-quite-yets and just-around-thecorners (and the goofball demands) of this gestating century." —Jerome Bixby

Watch for news of a new collection of Jerome Bixby's short stories and novelettes with a very personal introduction by his son, Emerson Bixby from Futures-Past Editions. Visit the Jerome Bixby Facebook page here: https://www.facebook.com/pages/Jerome-Bixby/253812261442534/
at 4:32 PM