The following mini-essay appeared in the About the Author feature of the Feb. 1953 issue of Imagination. Written by Philip K. Dick at the age of 27, at the start of his second year as an sf author, a year when he sold a whopping 30 short stories and novelettes to the magazines, it shows the young writer already ruminating over key issues and preoccupations that would become a predominant part of his body of work over the next decades. 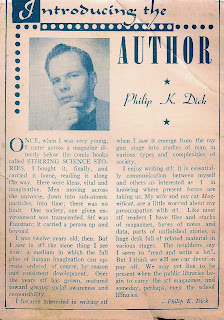 "Once, when I was very young, I came across a magazine directly below the comic books called Stirring Science Stories. I bought it, finally, and carried it home, reading it along the way. Here were ideas, vital and imaginative. Men moving across the universe, down into sub-atomic particles, into time; there was no limit. One society, one given environment was transcended. Stf was Faustian; it carried a person up and beyond.

"I was twelve years old, then. But I saw in stf the same thing I see now: a medium in which the full play of human imagination can operate, ordered, of course, by reason and consistent development. Over the years stf has grown, matured toward greater social awareness and responsibility.

"I became interested in writing stf when I saw it emerge from the ray gun stage into studies of man in various types and complexities of society.

"I enjoy writing stf; it is essentially communication between myself and others as 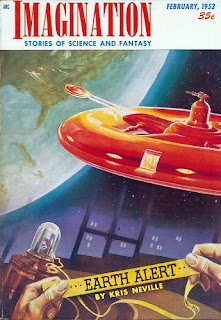 interested as I in knowing where present forces are taking us. My wife and my cat Magnificat, are a little worried about my preoccupation with stf. Like most stf readers I have files and stacks of magazines, boxes of notes and data, parts of unfinished stories, a huge desk full of related material in various stages. The neighbors say I seem to "read and write a lot". But I think we will see our devotion pay off. We may yet live to be present when the public libraries begin to carry the stf magazines, and someday, ,perhaps, even the, school libraries."—Philip K. Dick