During the late 1950s and early 1960s, S. E. Cotts (a long time staffer) reviewed new science fiction books for Amazing Stories, in a department called The Spectroscope. Below is the installment of The Spectroscope which appeared in the December 1957 issue, where Cotts reviewed books by Isaac Asimov, a young Robert Silverberg and the British writer, Rex Gordon. 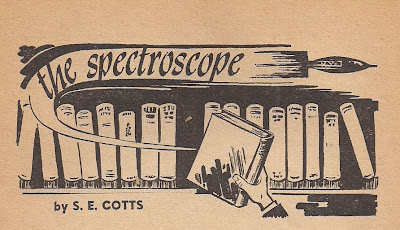 One always reaches out for.• an Asimov book with the same pleasure one experiences on meeting an old dear friend. In both cases one is assured of being entertained. In the case of Asimov, one has not only entertainment, but the additional dividend of well written, well thought-out entertainment. This collection (reprinted from a hard cover edition) is no disappointment. With this author quality is a habit.
Each of the stories is different and illustrates Asimov's imagination as far as variety of subject-matter is concerned. For instance, in one called "Youth," two boys catch some strange animals with which they intend to join a circus. In reality, the "animals" are intelligent beings from another planet whose tiny spaceship has crashed in an effort to make contact with one of the boy's fathers who is an astronomer.
Asimov's way with scientific detail is such that he can have you believing anything with the greatest ease. I read the story, "Sucker Bait," about a boy in the Mnemonic Service whose job it was to remember everything he saw, heard, read, etc., so he could serve as a kind of master card catalogue. When I finished I did not experience so much as a flicker of doubt that such a thing was possible.
But when it came to the title story, "The Martian Way," even I (ardent fan though I am) could not find the will to believe. Earth resents the fact that Mars uses so much of her water supply to run her spaceships and for other vital industry. She threatens to cut off Mars' water supply, thus crippling any chance for that planet's future growth. It is imperative that Mars find her own supply, and Mars succeeds. Where? On Saturn? How? By blasting an enormous hunk of ice from Saturn's rings (which are happily made of ice), embedding 25 spaceships in it, and flying the enormous iceberg back to Mars.
This story was a letdown in comparison to the plausibility of the others, but one cannot get too annoyed because even Asimov's failures are the work of a fine craftsman and though it fails, it certainly does so in the grand manner.
MASTER OF LIFE AND DEATH. By Robert Silverberg. 163 pp. Ace Books. Paper: 350
This novel of the future has its roots in a problem that. is already being widely discussed today—overpopulation. The story is filled with action; events tumble over one another.
By the 23rd century, Earth's population has reached the seven billion mark. Lack of food and space are a constant menace. Out of the crisis is formed the Bureau of Population Equalization, commonly known as Popeek. Its thankless tasks include shifting large numbers of people from overcrowded countries to underdeveloped, spacious ones and practicing Euthanasia (called Happy Sleep) on weak children and suffering adults. The person who heads such a Bureau must be very strong—strong enough to withstand pressure from the two opposing camps: those who did not wish to see any organization given God-like powers, and those who felt that even Popeek's measures were not strong enough. The leader must also be callous enough to believe that the ends justify the means .and unselfish enough to serve in a post where the assassin's bullet might come at any time. And as if the job were not complex enough already, he must decide how to release the news of successful experiments in immortality, and a successful exploration trip to a distant star without starting a public riot.
Obviously such a leader must be a superman, and Ray Walton, the hero, is very nearly just that. Too much so, in fact. Yes, Mr. Silverberg has him fall under the sway of a greedy brother and spare the son of a well-known poet from Happy Sleep, but his description of the doubts these acts bring seem very superficial. This reviewer wanted to see more of a real human being in the post, even if he failed in the end. Ray Walton does not fail ; he succeeds but only due to an extreme stretch of the imagination.
The author has written a good story (no small accomplishment), but given this situation he could have written an excellent one. It's a thrill-provoking story; it should have been a thought-provoking one.
FIRST ON MARS. By Rex Gordon. 192 pp. Ace Books. Paper: 350.
This is an excellent science fiction book. The only misfortune connected with this fact is that the person who develops a taste for topnotch s-f is likely to go hungry most of the time. There just isn't enough good stuff to go around.
Gorden Holder, an engineer, had been working on experimental rockets at the Australian Proving 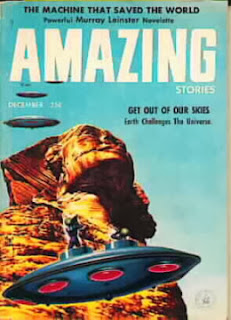 Grounds. He is the sole survivor of a crew of seven manning a spaceship years ahead of its time. How he managed to survive not only the crash, but fifteen years on Mars, forms the engrossing bulk of this book.

The interest is kept and held at a high pitch even though there is really only one character. The gadgets that Holder built to keep alive are always interesting and plausibly explained. And the ideas that pass through his mind, the various moods that color his fifteen Robinson Crusoe-like years are beautifully set forth.
Occasionally one gets a bit startled at the fact that Holder is able to solve all the problems with which he is faced. But this flaw is almost a welcome one because the book is so well written that one would otherwise be convinced that Gorden Holder is not just a bit of imagination, but a real man.
at 3:51 PM