by James V Taurasi Sr. from the June 1952 Other Worlds

[James V Taurasi Sr. (1917-1991) was a noted fanzine publisher and editor from the mid-1940s through the late-1950s. His Science Fiction Times, one of the earliest sf and fantasy newsletters (or newszine), was honored with four Hugo Awards for Best Fanzine. He began reading science fiction almost with the first Gernsback Amazing Stories and knew all the early science fiction editors personally. Other Worlds could not have picked a better person to profile them.]


The Amazing Stories Era: Gernsback and Sloane
SCIENCE-FICTION editors are a queer breed of people. They could originally have been editors of the swellest slicks in the publishing field (and some of them were) but let one of them edit a science-fiction magazine, and thereafter he calls himself nothing but a science-fiction editor and fan. The other magazines he edited no longer count. All he'll talk about is the scientifiction magazine he's editing or has edited. With no exception, they're all like that. 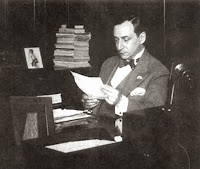 It all began in 1926, when the "papa" of the pulp scientification magazines, Hugo Gernsback, decided to put out a magazine devoted exclusively to science-fiction stories. He had been publishing science-fiction in all his magazines for years.- About the best of these were the stf serials in his Science and Adventure, a magazine similar to Popular Science of today. He had even tried an all "Science-Fiction" edition of that magazine with great success.

Hugo Gernsback has been a science-fiction fan from his early childhood; he coined the term "science-fiction" to describe his favorite brand of scientific literature. In fact he also coined the word "'scientifiction" from which we get the abbreviation "STF". His first all-stf magazine was to have been called Scientifiction, but afraid that it would scare away readers who would misunderstand what it contained, the name Amazing Stories was finally decided on and Amazing Stores it was, the first in the field.
Sam Moskowitz in his "Immortal Storm" (the history of fandom) summed up the work of Gernsback when he stated: "Hugo Gernsback did something for the science fiction fans that had never been attempted before; he gave them self-respect. He preached that those who followed this sort of reading matter avidly were not possessed of a queer taste, but actually represented a higher-than-average type of intellect. And he tried to lay down rules for science fiction. Primary among these were plausibility: nothing was to appear in the stories he published that could not be given a logical scientific explanation." (Quoted from Fantasy Commentator, Fall, 1945.)

Hugo Gernsback left Amazing Stories in 1929 and soon after started another quartette of stf magazines. This time he called them, Science Wonder Stories, Air Wonder Stories (which combined a year later into Wonder Stories and is still being published today as Thrilling Wonder Stories), Scientific Dectective and Wonder Stories Quarterly. He edited and published Wonder Stories until 1936 when he sold it to Standard Magazines, Inc.
While publishing Wonder Stories, Gernsback gave the then budding science fiction fandom a much needed shot in the arm by forming the "Science Fiction League" to which many fans credit the foundation of modern fandom. Again we turn to Moskowitz's "Immortal Storm" for a summation. In Part 2, Chapter 8 of this history, Sam stated: "Looking back from the vantage of a decade's perspective, we are forced in fact to admit that the Science Fiction League was more beneficial and important to fandom than any organization which preceded or followed it. Not only did it actually create the fan field as we know the latter today, but it gave the field something that it had never possessed before: a realization of its own existence." (Quoted from Fantasy Commentator, Winter 1945-46.)
Thus, Hugo Gernsback is not only the father of the science-fiction magazine, but the god-father of science-fiction fandom as well.
Many volumes could be Written about Hugo Gernsback, the man, but it would be best to let his good friend, the popular author, Dr. David H. Keller, who knew Gernsback personally' when he was at the height of his stf publishing, tell you about him.
Writing on Gernsback in the tooth issue of Fantasy-Times, Keller stated: "When I first met Gernsback in New York he impressed me as a polished cosmopolitan rather than the usual chauvanistic American. Tall, brunette, energetic, he seemed, in spite of quiet mannerisms, to have a boundless reservoir of energy to be used in editorial or financial emergencies. He always took home with him a brief case filled with manuscripts which 'he read in bed between the hours of 11 P.M. and 2 A.M. He rarely allowed social engagements to interfere with his editorial work. He was a genial host; in his moments of relaxation told interesting tales of his boyhood in Europe. At the age of 14 he wired a convent in Luxemburg, his home city, so that the Mother Superior could ring for her subordinates when she desired their presence. This convent was closed to men and it was necessary to secure Papal Dispensation to enter and install the electrical, system."
Gernsback has only attended one meeting of any science fiction fan club in the world. His one appearance was at the March 1950 meeting of "The Eastern Science Fiction Association." Here he stated that he gave up science-fiction publishing because he could' no longer get the kind of stories he wanted. He admitted that he knew nearly nothing of modern stf, and confessed that he hardly recognized it as the same species of story.
Gernsback is now in his mid-sixties and is still an editor and publisher. He publishes Radio-Electronics, the leader in its field. Last year his famous book "Ralph 124C41 plus", was reissued, and this year it will appear in England as a pocket book.
Under Gernsback, as managing editor, was Dr. T. O'Conor Sloane, Ph.D., who stayed on with the magazine Amazing Stories, after Gems-back left it in 1929 and later became full editor until the magazine was sold to Ziff-Davis in 1938. Dr. Sloane was a picture of the ideal scientist. Tall, slim and with a long white beard, he looked the part fans associated with stf editors. He also has the honor of being the oldest man ever to edit a 'stf magazine. Born on November 24, 1851, he was 87 when he left Amazing. He passed away in the early 1940s, having reached the age of go plus. Although he accepted and published many excellent interplanetary stories, he was .of the opinion that man would never conquer space and would never reach the moon.
The Astounding Science Fiction Era: Tremaine and Campbell

F. Orlin Tremaine is the editor who really knocked the whole stf publishing field for a loop. He was the Editor of Street and Smith assigned to run Astounding when they purchased it in 1933. Tremaine soon had the magazine on the top of the heap. Here's what Moskowitz says about him. Once more we quote from "The Immortal Storm:" "When Clayton Publications was sold to Street & Smith in 1933, Astounding Stories reappeared after a six month hiatus under the editorship of F. Orlin Tremaine whose reputation at that time was at its all-time high. A science fiction fan himself, Tremaine managed within two years' time to rocket Astounding to the leading position among fantasy pulps, printing such high quality of popular fiction that his two competitors were almost forced out of the running." (Quoted from Fantasy Commentator, Spring 1949.)
In fact it was only a few years later that both competitors were sold. Wonder in 1936 and Amazing in 1938.

Tremaine became editorial director in 1937 and appointed the popular author John Campbell, Jr., to the position of editor for Astounding, a position he still holds today.
Tremaine soon left Street & Smith and has since done numerous editorial and publishing assignments.
He had his own book publishing company for awhile and has since been editor of numerous magazines. He is an author in his own right with numerous stf and detective stories under his belt.
He proved he was still a good stf editor, by publishing the stf magazine Comet, in the early 1940s. Though it published only five issues and was greatly handicapped by a company that could only pay the lowest of rates and employed a poor quality printer, Comet came close to becoming the king of the then published stf magazines before the company went bankrupt and the magazine folded. Had he had a better company to publish it, Tremaine would have made Comet the leading stf mag.
Tall and slim, Tremaine has always been interested in stf fandom, attended numerous club meetings and conventions. Today he is an active member of "The Fantasy Veterans Association" (having served in the US Army in World War I) and is presently book editor of the magazine Check. 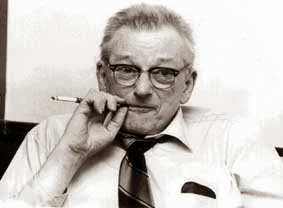 John W. Campbell followed Tremaine as editor of Astounding Stories and continued to keep it at the high level upon which Tremaine had placed it. His first change was to rename the publication Astounding Science Fiction. Now the Astounding part of the title has all but disappeared. Many fans are certain that Campbell would like to make it plain Science Fiction, if he could. Campbell was a very popular writer, one of the best, before he tied himself to an editorial chair, and many scientifiction experts believe the field lost one of its best authors when this happened. Campbell has always had a yen for editing a

scientific magazine like Scientific American, but the closest he's been to this is when he took over Air Trails and changed the name to Air Trail Science Frontiers and included space travel items in it. But the readers of the magazine wanted only airplanes and soon Campbell was left with only Astounding under his control. Among his well-liked editing ventures was Unknown, still a much sought after mag. fans have asked time and time again to be revived. Unknown died via the paper shortages of the last war and though it looked like it might be revived after the war, to date it has not. A slight gleam of it was seen in 1948, when an

annual From Unknown Worlds was published. To his credit it can be said that Campbell kept Astounding published monthly through the last war, the only stf mag to do so, and has kept the stories in the magazine on top level all through the years. Some fans greatly resent Campbell's  dragging Hubbard's dianetics into Astounding. They feel that it has no place in a stf magazine. Currently, besides editing Astounding, Campbell is putting together an anthology of stories from his magazine to be published by Simon and Schuster early in 1952.